Media as Partners in Suicide Prevention

The following sections are excerpts from:
suicidology.org/reporting-recommendations 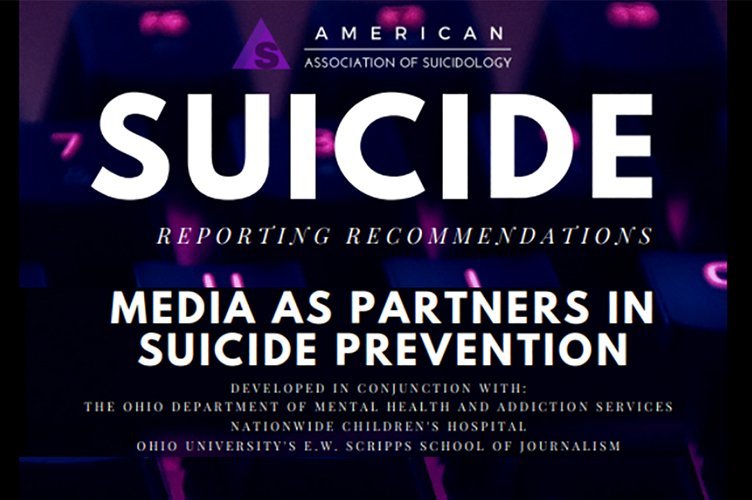 Journalists have a difficult task when making decisions about how to report on suicide. There is a tension between generating a visible, consequential story on suicide and avoiding elements that may contribute to an increase in suicides among vulnerable individuals, referred to as suicide contagion. As the public increasingly turns to social media to access news, it has never been more important for journalists and developers of online content to consider how they are portraying suicide. The increased capacity of social media users to share information rapidly to a broad audience means that getting a story right the first time is essential. However, journalists are often tasked with gathering facts and reactions from many sources with very little time to create a story. Making suicide reporting guidelines widely available and accessible is a critical step to ensure that more stories include safe and effective messaging on suicide.

These guidelines provide updates from previously published national and international suicide reporting guidelines, along with updated recommendations for reporting on suicide using social media. They are not intended to limit press freedom but rather serve as an evidence-based resource for effective reporting on suicide. They are grounded in the principles of journalism ethics and suicide prevention. The goals of these guidelines are to support journalists in creating effective news stories that inform the public and increase awareness about suicide and its complexities, while reducing risk of additional suicides. Ideally, these stories will also provide resources and a sense of hope to those experiencing suicidal thoughts and behaviors. Adoption of these guidelines will reduce the risk of suicide for those vulnerable to suicide contagion and allow journalists the freedom to tell stories that make a difference. Suicide reporting guidelines should be provided to all journalists, news editors, website providers, bloggers, virtual communities, and users of social media to ensure widespread adoption. People reporting on suicide have the power to change public perspectives, reduce prejudice and discrimination around suicide, and save lives with the implementation of these guidelines. 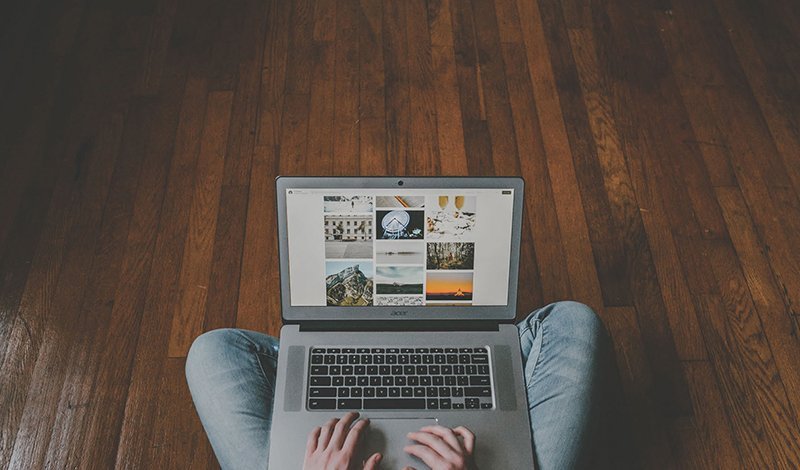 Suicide contagion is the process by which one or more suicides increase the risk of suicidal behavior in others. When an unusually high rate of suicides occurs in a specific region or across a specified period of time, it is called a suicide cluster. Research suggests that certain ways of reporting on suicide can contribute to imitative suicides or suicide clusters. Contagion effects are likely to occur when someone perceives increased benefit of suicide after being exposed to suicidal behavior of others directly or through media coverage.

SECTION 2: FORMING YOUR STORY (The Why and the How)

A journalist can choose to formulate a story about suicide in many ways: a tragic event that has devastated a community; the unpredictable or dangerous behavior of a person battling a mental health condition (not advised); or the loss of an individual who struggled with profound emotional pain but was unable to access potentially lifesaving resources. A journalist’s story formulation has the power to influence public perception regarding suicide. Research suggests that the manner by which a suicide is described can either increase or decrease the risk of vulnerable individuals to engage in suicidal behavior. 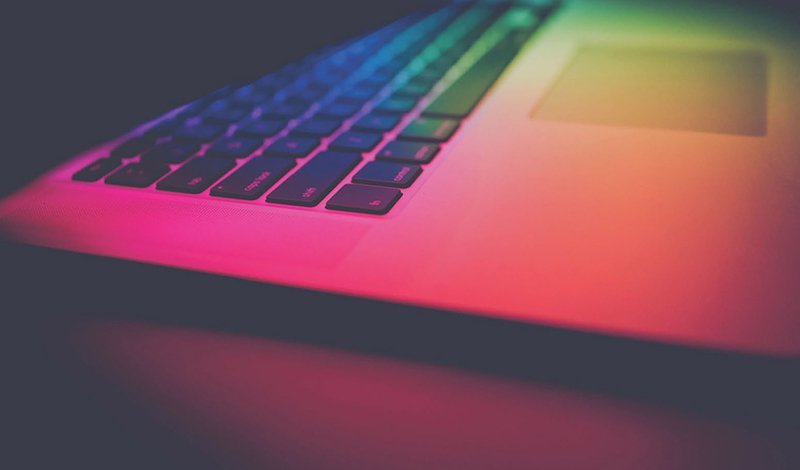 SECTION 3: FINDING THE RIGHT LANGUAGE (How We Talk About Suicide Matters) 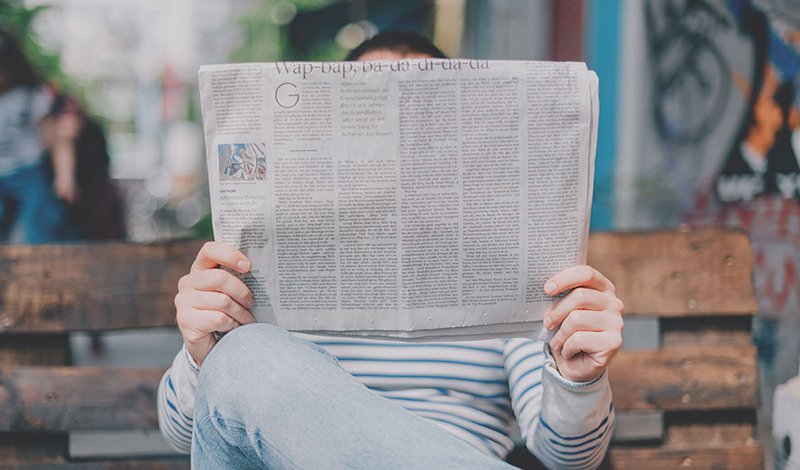 Journalists are aware that the precise use of language is critical in shaping public perceptions, and there is a clear need for increased awareness and a healthy dialogue about suicide. How the media depicts suicide is instrumental in framing public discourse. Unlike many other forms of death, suicide carries the weight of social stigma and shame, which can lead to discrimination and prejudice against people with mental health conditions.

Despite being one of the leading causes of death across the lifespan, many misconceptions exist about suicide that are often reinforced by the types of language used across all forms of media. Decisions around word choice are highly relevant when reporting on suicide. Specific terminology can either reinforce stereotypical notions, myths, and misconceptions of depression and suicide, or they can frame suicide as a largely preventable public health problem.

One of the main contributors to suicide is the individual’s experience of hopelessness, burdensomeness, isolation, and the belief that there is no end to his/her/their unbearable emotional distress. (24) Stories that suggest suicide was inevitable or inexplicable are largely inaccurate and may contribute to suicide contagion. Conversely, it is possible to report on suicide in a way that cultivates hope by increasing awareness of available supports for those who struggle with suicidal thoughts or behaviors. Some readers may be distressed when reading a story about suicide; providing information about easily accessible resources and helpful treatment options should be included in every story. 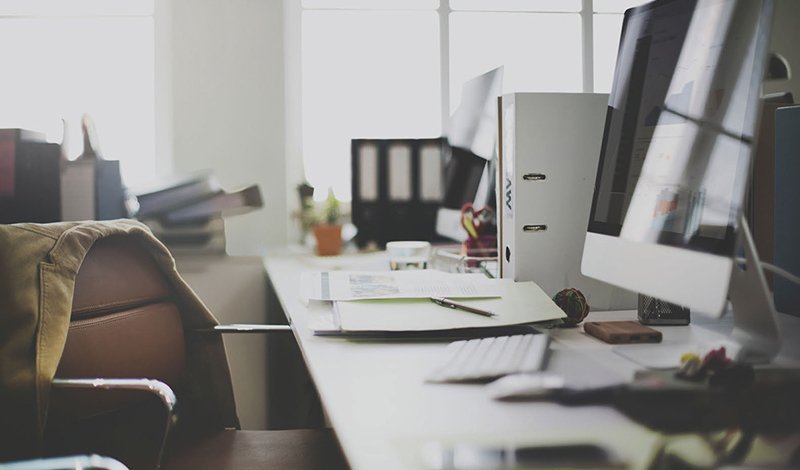 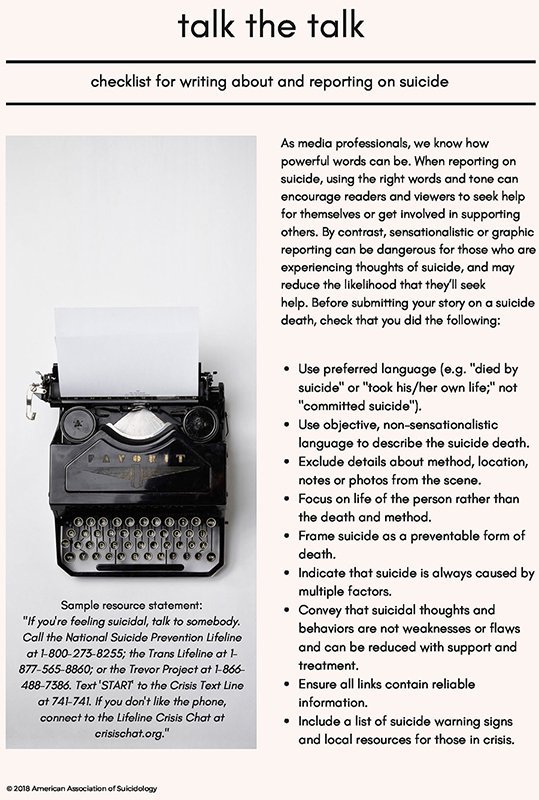